LAVA BOMBS: Truths Behind The Volcano

Through our collaboration with Alexander Whittle of Newlight Studio, we co-produced a documentary LAVA BOMBS, telling unheard human stories of the 2021 eruption of Volcán de Tajogaite volcano in Cumbre Vieja, La Palma and critically analysing the response to this disaster before, during and crucially after the eruption. You can watch the trailer for LAVA BOMBS below and see full details of where and how to watch it on www.lavabombsfilm.com. The movie aims to humanise the deep impacts of this event so we can encourage open debate and help to build RESILIENCE for the future. We invite you to participate in the conversation by posting on Twitter and IG and tagging @lavabombsfilm.

We want to extend our upmost thanks to the people of the La Palma, without whom the LAVA BOMBS documentary nor the VolcanoStories project would have been possible. Throughout our time on the island, we have been incredibly humbled by the friendliness, generosity, interest and sincerity shown to us by the people of La Palma, especially given the personal ongoing difficulties that are being experienced by many islanders.
We are so grateful for all those that volunteered their time and experiences to us, we are thoroughly indebted to all of you. We continue to wish for all the best for La Palma and its people as it navigates the difficult task of recovering from this disaster. We continue to be firmly committed to telling this story, and supporting La Palma more broadly through setting up more science training camps on the island and fighting for more funding for Volcanological research in the Canary Islands wherever possible.

All of the participants in the film have been impacted by the unprecedented 2021 eruption in La Palma – by giving them all a voice we aim to build a bridge of understanding so that in future we can help to lessen the pressures and distress of any future event in the Canary Islands and other territories living with natural hazards.

It’s a difficult conversation, and we are eternally grateful to all the brave participants who agreed to take part during an exceptionally stressful time.

In particular, we want to give a special thanks to all the residents we interviewed on La Palma:

As well as all those we spoke to involved in the emergency response and communication:

And the institutions which helped us throughout the documentary:

INVOLCAN and Pedro Sanchez (President of Spain) were invited to participate.

The inception of LAVA BOMBS

For our team, adapting to the rapidly evolving situation was a dramatic experience. When we first arrived on La Palma on the 25th September, primarily to report on the eruption, it was overwhelming to witness at first hand the wide-ranging impacts of the volcanic event.

At times it was difficult to keep our emotions in check, and we witnessed many events too hard to report here, but we wanted to be available to provide context and scientific rigour to the international media teams on the ground through our associated experts.

It was whilst reporting on the updates from the eruption that we started to conduct our own interviews with local people on our phones. We wanted to document their rich stories and experiences, which especially at the start of the eruption risked being buried or forgotten due to the focus of both local and international media predominantly on the latest scientific updates of the eruption. Very quickly, we realised how valuable these testimonies would be for remembering all perspectives of the eruption. And of course, recollections vary over time and we felt it was vital to record witness testimony in real time.

In order to add rigour and quality to filming and raise our documentary to full feature status we joined forces with Alexander Whittle and Newlight Studios to explore the less reported sides of the eruption more professionally and extensively. We wanted to find a medium to ensure the voices of La Palma reached far and wide, so lessons can be drawn and changes implemented by emergency managers worldwide.

As well as local residents, we interviewed politicians, local and international scientists, and NGOs working as part of the disaster response, to piece together a holistic understanding of the eruption’s response.

We were unable to fit them all in the main documentary, but resolved to publish them in full via VolcanoStories to enable open access for anyone who would like to watch them.

We continue to talk, listen, debate and record in La Palma and Lava Bombs 2: The Reconstruction is due for release in September 2023.

When we first drove close to the volcano in our rental cars, we heard a sprinkling sound on the roof which we assumed was rainfall but turned out it was ashfall from the volcano. One challenge of our trips was to stop this ash getting into our filming gear and other electronics where it could have easily caused some damage.

This is a behind-the-scenes clip of how we filmed our Instagram Livestreams when we were reporting on the eruption at the end of September. You’d often lose your train of thought because you were distracted by a particularly dramatic explosion from the volcano, or you’d have to shout over it to be heard on the livestream.

With Lava Bombs: Truths Behind the Volcano we aim to reflect the points of view of those affected by the eruption of Volcán de Tajogaite in La Palma and encourage widespread debate about valuable lessons that can be learnt and implemented.

In August/September 2022 we ran our annual summer training camp in the Canary Islands called @GeoIntern and we showed our international students the film. Their response was emotional and very intense, and many of their views are reflected on our website www.lavabombsfilm.com. It is heartbreaking to see how unevenly the lessons from previous disasters from around the world are being implemented. We hope, with this humble and well-meant film, to keep highlighting the many practical implications of emergency management and aid understanding so many of the pressures and anxieties felt in La Palma can be better understood and alleviated on all concerned.

We have started showing Lava Bombs openly in La Palma and running discussions to ensure everyone can watch, listen and be heard. We are open to running other forums where it would be useful: please contact sharonbackhouse@geotenerife.com

We also encourage open feedback and debate: please join the online conversation by posting on Twitter and Instagram and tagging @lavabombsfilm. Our LavaBombsFilm YouTube channel will also feature updates and feedback.

The entire GeoTenerife team will never forget the experience of the 2021 La Palma eruption. The sights, sounds, smells, feelings of this disaster as well as the places we visited and the people we met and remain in contact with remain in our hearts and we will keep working in La Palma to keep documenting as the reconstruction takes shape.

We love la Isla Bonita – we encourage you to visit and promote La Isla Bonita and its wide beauty and warm heart. Fuerza La Palma.

On the 11th September 2022, GeoTenerife held an intimate private viewing of the documentary for people affected by the eruption and those who were involved in the documentary. We wanted them to have a chance to see the documentary before it went for general release. It was an incredibly moving yet positive and necessary event, with a 2-hour mediated discussion about the documentary afterwards between scientists, politicians and residents, the first time that many of the affected residents had been able to have a voice in such an open forum.

Our 2022 La Palma GeoIntern cohort were also in attendance, and our three science communication interns Harjoth Soor, Divas Parashar and Ana Pelli wrote a brilliant piece on their experiences of the event, which you can also read on this page

“‘Lava Bombs: Truths Behind the Volcano’ is an important documentary that tells the story of the Tajogaite eruption that occurred on the island of La Palma on the 19th of September, 2021. This Sunday, on the 11th of September, the film was premiered to local residents of the island and collaborators of the film so that they could present their views on the documentary and have an advance viewing before the final release. The film was presented at Cañas de Fuego, the interpretation centre built for the 1949 eruption, which now also has a new exhibition about the 2021 Volcán de Tajogaite eruption. This centre is located in the village of Las Manchas – one of the villages closest to the volcano. It was important to present the film in this area first as the museum provided a safe and intimate space for the affected people who are still dealing with the significant consequences of the disastrous event.” 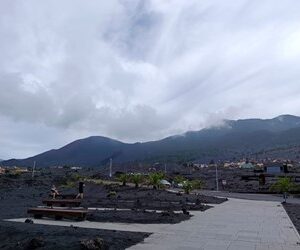 “Another resident expressed his dissatisfaction in the handling of the disaster by stating, “It was a matter of luck that there were no fatalities in this eruption. Had it happened at night time, I do not know how everyone could have survived”. Later in the discussion, a man imitated the sounds people heard around the island two weeks before the eruption while one of the local residents also explained to us how animal behaviour had changed weeks before the eruption. Her parrots and dogs did not want to leave their houses anymore. In the views of the residents, nature already gave signs that a huge event was about to happen and perhaps such ominous signs should be considered seriously. Finally, the discussion ended in the claim for a volcanic observatory in the island of La Palma. “It is the most active island in the Canaries, so why are there no dedicated observatories and laboratories here?”, someone added. During the eruption in La Palma, for analysis, rock samples from the eruption had to first travel by ferry to Tenerife, and then fly to Madrid. The lack of an efficient infrastructure here to prepare for volcanic hazards contributed to difficulties faced in the eruption response.

The intimate screening of a documentary that highlights the plight of those affected by a natural disaster achieves many goals, especially when the screening is held specifically for those whose story is being told in the film. This is significant at a time when filmmakers make terrific films about communities and people, but forget to include them in the conversation. The important themes brought out in the film, presented in a thoughtful way, touched those in the audience and this set the tone for an open and personal conversation right after. This gave the affected residents an opportunity to express their inner thoughts and shed light on their experiences of the disaster. The world has much to learn from what they have to say, and an intimate private screening like this is perhaps the best way to hear their voices.

Moreover, it is a good practice for filmmakers to first run their film through the various collaborators and stakeholders, in order to prevent any miscommunication and dissatisfaction when the film is released for a wider audience. Such a private screening with collaborators gives the filmmakers a unique opportunity to understand if they have done a good job at presenting the voices of the collaborators in a sensitive way that does not misrepresent what they intend to say. Given these factors, the makers of ‘Lava Bombs: Truths Behind the Volcano’ have attempted to stand up to the highest ethics of filmmaking and being responsible storytellers. We hope this event stands as an example for all filmmakers who are doing a commendable job at telling important stories and we wish the very best to Sharon and her team for the release of ‘Lava Bombs: Truths Behind the Volcano’ later this month.” 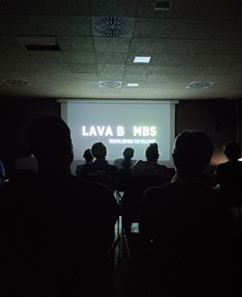